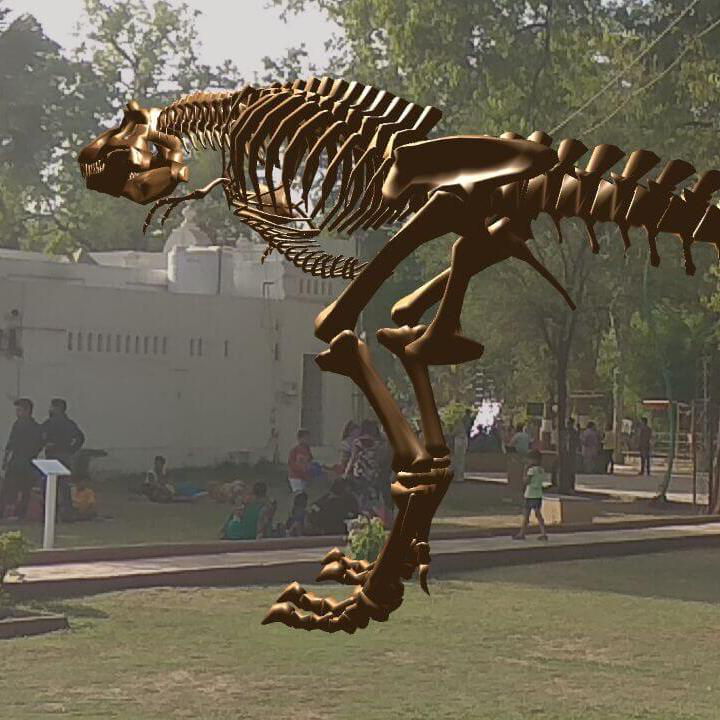 Tyrannosaurus rex was one of the largest meat-eating dinosaurs that ever lived. Everything about this ferocious predator, from its thick, heavy skull to its 4-foot-long (1.2-meter-long) jaw, was designed for maximum bone-crushing action. Fossil evidence shows that Tyrannosaurus was about 40 feet (12 meters) long and about 15 to 20 feet (4.6 to 6 meters) tall. Its strong thighs and long, powerful tail helped it move quickly, and its massive 5-foot-long (1.5-meter-long) skull could bore into prey.

T rex’s serrated, conical teeth were most likely used to pierce and grip flesh, which it then ripped away with its brawny neck muscles. Its two-fingered forearms could probably seize prey, but they were too short to reach its mouth.

Here’s a video that tries to capture the experience of standing in front of the T Rex skeleton at Sayajibaug.

Learn about T Rex in 3D right here in a vue web player. Just hit the play button below and walk in the vue using W-A-S-D or up-down-left-right arrow keys and navigate your way in 3 dimensions using mouse left click. Don’t forget to share this with your friends and family.